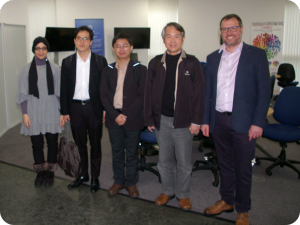 The first meeting of the SINAPSE Image Analysis group was held at the University of Dundee on the 20th September 2017. Attendees from SINAPSE and the National Taiwan University were welcomed to the Queen Mother Building by Image Analysis group Lead Dr Gordon Waiter and Deputy Lead Dr Islem Rekik, with a friendly tea and coffee morning and great opportunities for the delegates to network.

Dr Ahmed Fetit from the University of Dundee opened the morning session with a talk on his work which used Dundee’s own VAMPIRE (Vascular Assessment and Measurement Platform for Images of the REtina) software for automatic quantification of retinal properties, which not only is cheaper than MR imaging, but can also be used to reveal vascular structure of the brain and discriminate dementias.

Yao-Chia Shih (PhD student) continued on HCP-DSI template work where he demonstrated the HCP-DSI template had a lower signal-to-noise (SNR) ratio than the NTU-DSI-122 template, which resolved issues with complicated crossing fibres and gives a more detailed description of fibre tracts throughout the brain.

Dr Lucia Ballerini (University of Edinburgh) was the final presenter of the day who discussed her algorithm for automatic segmentation and quantification of enlarged perivascular spaces in brain MRI, an imaging feature that has proven notoriously difficult to segment, manually or automatically.

Dr Gordon Waiter (University of Aberdeen) concluded the session by expressing gratitude to all organisers, attendees, presenters and special guests from Taiwan who helped make the first SINAPSE Image Analysis group meeting happen. The image analysis group is a new platform which offers new opportunities to collaborate with like-minded researchers within the network.

The meeting drew to a close with a group discussion of the possibility of launching an Intense Learning Workshop (ILW) that could cover topics such as machine learning, feature extraction, programming, image preprocessing, statistical analysis classes and much more.